The Nikon D5300 is an update to the D5xxx line of DX-series digital SLR by Nikon. It continues to offer a tilting/folding LCD screen in a compact body. Like the D5200, the new D5300 has a 24MP sensor capable of delivering top performance of any APS-C (DX) format on the market.

Indeed, The Nikon D5300 has the same sensor as the flagship DX camera, the D7100. And like the D7100, the D5300 lacks the traditional anti-aliasing filter. This results in sharper images and gives the best image quality possible while slightly increasing the possibility of color artifacts (Moiré) in some areas of repeating detail or fine lines (grids, fabrics, screens, etc.). The D5200 gives the same resolution and nearly the same image quality, but has an anti-aliasing filter to reduce the chance of Moiré.
The D5300 is the first Nikon with the new EXPEED 4 image processing engine. This allows for an increase in processing speed and yields new video frame rate of 60 progressive frames per second at full 1080 HD resolution. Previously the D5200 only offered this as an interlaced mode.

One major difference is the D5300 now has built-in GPS and Wi-Fi. Previous models required optional external devices to offer these features. If you plan to use them, the new camera offers a tremendous value compared with buying them separately for a previous model.

The D5300 uses the same Multi-CAM 4800DX AF system as the D5200 and performance will be similar. A change was made in the viewfinder to provide more magnification, now 0.82x magnification optical pentamirror (up from 0.78x magnification).

The LCD Display on the D5300 has been enlarged to 3.2-inches from 3-inches and now has 1,073,000 dots, up from 921,000 dots. The D5300 adds two new special effects bringing the total to 9. The added filters are Toy Camera and single image HDR painting.
The D5300 is also slightly smaller and lighter than its predecessor. Weighing in at 480 grams instead of 505 grams. Much of the savings is due to the D5300 monocoque body construction, made from a single piece. The hand grip was also improved and the body was made smaller by a few millimeters in each dimension.

The D5300 is much more than the same camera with just added GPS and WiFi. It has been redesigned inside and out and represents an outstanding value in a mid-level DSLR. Offering the same class-leading image quality as the DX flagship, while providing additional features not available on any other current model. 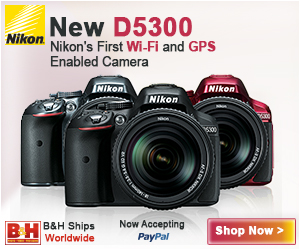